A review of Surf's Up including a description of the movie, areas of concern, teachable themes, and scriptures to use. 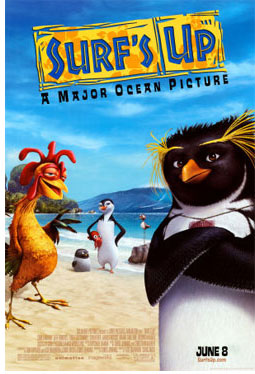 Shiverpool, Antarctica-native Cody Maverick is an undersized penguin with an oversized passion to be a winner. Having met surfer legend Big Z as a child, Cody now thinks of nothing more than surfing. Because he thinks that a surfing trophy will bring him every thing he has ever wanted, Cody is determined to do whatever it takes to win the 10th Annual Big Z Memorial Surf Off.

Unfortunately for Cody, he lives in a small village in Antarctica where his future is sure to be filled with sorting fish and nesting eggs. Surf's Up is a behind-the-scenes look at the annual Penguin World Surfing Championship, and its newest participant, up-and-comer Cody Maverick.

Although the movie has been heavily targeted to children, it seems the content is more appropriate for older elementary and teens. Surfs Up has a fair amount of mildly rude language and potty humor. Most, if not all of the innuendos will go right over kids heads, but could have been left out all together. Below is a brief description of some of the questionable content.

Young Cody's dream is to leave his family and home in Shiverpool and to travel to "Pen Gu Island" for the Big Z memorial Surf off. Cody's mantra for the movie is "Find a way. 'Cus that's what winners do." Eventually Cody realizes that winning isn't everything and there is more to life than taking home the trophy. Cody also makes a huge sacrifice to better a friend. Many children will be able to identify with Cody, a teenager who has dreams and desires as well as fears of what his future holds.

Many will enjoy the documentary-style of this movie. With cool surf music, excellent animation, and suburb surfing sequences it is another fun penguin film!