Movie Review: Night at the Museum

A review of Night at the Museum including a description of the movie, areas of concern, teachable themes, discussion questions, and scriptures to use. 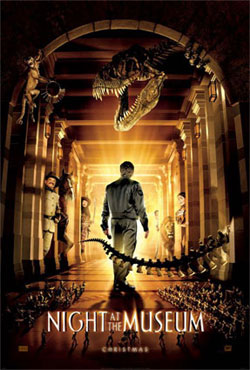 Overview
As a kid, I remembering entering into many museums on school field trips and wondering what it would be like to roam the place at night and be able to get inside many of the exhibits and be a part of history. Night at the Museum brings this childhood fantasy to life.

Larry Daley (played by Ben Stiller) is a failed New York inventor who seems to have trouble keeping a job. Looking pathetic in the eyes of his son and to appease his ex, he finally finds a job as night watchman at New York's Museum of Natural History.

Larry is introduced to the job by three slightly crazy old-timers (Dick Van Dyke, Bill Cobbs, and a creepy Mickey Rooney). Larry finds that this dull job is not quite what he expected on the first night. All the animals, from lions to dinosaurs, come alive. So do the wax figures, from a full-sized Teddy Roosevelt (Robin Williams) to tiny figurines such as an Old West cowboy (Owen Wilson) and Octavius (Steve Coogan). In the first night alone, Larry must deal with Attila the Hun, an insane monkey, attacking lions, giant dinosaur bones, arguments between cowboys and Romans, and Mayan Indians. At dawn, however, everything turns back to normal.

Through all of this commotion, Larry's job is threatened when the very picky museum director notices a few things wrong. Wanting to just give up, Larry doesn't and the rest of the movie chronicles how and why the museum comes alive through an ancient Egyptian tablet, run-ins with the three night guards, and what happens each night leading up to a huge climax and how all of this mess affects Larry's relationship with his son.

This movie is definitely a great flick to see with the family. The special effects are awesome, and I can only imagine what they would look like in IMAX. Given the lineup of comedic characters, I was very surprised to see only a couple of profanities and a couple of instances where God's name is taken in vain. These are very quick and can almost go unnoticeable. There were some scary things but most of the kids in the theater I was in, didn't seem to mind too much. I can see where children under 6 may be scared of the lions and dinosaur when they come to life. There were a few instances of "slapstick" comedy as well. Overall, this is a great movie for the entire family. The young ones will enjoy the antics of Ben Stiller and Owen Wilson, while the older ones will enjoy the comedy from Robin Williams, Mickey Rooney, Dick Van Dyke, and Bill Cobbs.

Most of language and "violence" is very brief in the film. The few concerns that may arise involve the issues of evolution and spiritual elements. When dealing with a history museum, in most cases you will find talk of evolution. The movie, however, does a great job of teaching us about dinosaurs and cavemen, but there are comments encouraging Larry to be the "more evolved" man, or refers to monkeys as our brothers.

On the spiritual side, magic is mentioned a few times. It's a magical Egyptian tablet that brings everybody and thing to life each night. The exhibit also houses the Pharaoh Ahkmenrah who comes to life as well. He uses the artifact to call the animated exhibits back to the museum. The three old watchmen also insist that the tablet gives them renewed energy. The Huns, particularly Attila, are obsessed with magic and sorcery. The movie downplays this as Larry uses carnival magic to gain the respect and attention of the group.

Probably the most noticeable theme is perseverance. Larry attempts to leave or quit his job each day of the movie, but he doesn't give up.

When it seems like he has completely messed everything up he looks to President Teddy Roosevelt to fix everything and offer him an easy way out. Roosevelt looks back at him, however, and says "I am only made of wax, but what are you made of?" At the end Larry's endurance could be compared to the life of Moses. There were many times that Moses felt like giving up or like there is no hope, but God continued to call him.

Towards the end of the movie there are many scenes involving teamwork. Many people who did not get along before, were forced to work together as a team. Larry spends much of the first few nights trying to get the cowboys and Romans to work together. They reluctantly agree to do so, however, upon returning Larry finds that the two groups are "at war" once again.

In the movie the power came from the Egyptian tablet, in our lives, power to do the impossible comes from God.

"People look at the outside of a person, but the Lord looks at the heart." 1 Samuel 16:7

In the movie Teddy Roosevelt asks Larry, "What are you made of, " referring to the fact that Larry has heart and passion. Larry was confused that the statue of the president was actually the president, when in fact it was only a symbol of history. The statue wasn't the real Teddy. It doesn't matter that someone may look powerful on the outside, God works with us on the inside.