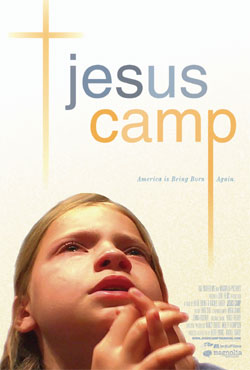 I was very impressed by the level of faith displayed in the children that Jesus Camp focuses on, especially Levi and Rachael. (I thought Tori had the least screen time, and it was hard to get an accurate read on her). While I was uncomfortable with the speaking in tongues and I wished that instead of using the term "Evangelical" the makers of the film would have used the word "Pentecostal". I would say that it was a good camp led by great children's pastor. However, I think that these kids' tremendous faith had more to do with the fact that they were home schooled than the camp.

I think Becky (the children's pastor) did a good job of recognizing spiritual gifts and training kids to use them. At one point Levi, age 12, preached. We saw him working up his sermon and delivering it, in part. I thought, by the way, that it was a good sermon with salient points. We didn't see any of the workshops they offered at the camp, only parts of the main sessions and some of the free time.

At first it seems they were a little heavy handed with the abortion issue (at camp), but, they weren't advocating hatred towards women who have abortions, they were praying that God would bring an end to it, that He would bring Christians into positions of power and that they would end it. Also, they didn't candy coat what abortion is for these kids (I'm not saying that they gave all the gruesome details, at least not on camera), but they had small replicas of what a fetus looks like at 7 weeks, 3 months, etc. The controversial "Righteous Judges" part was the group of adults and kids calling for God to have righteous judges appointed to the bench who will work to eliminate abortion.

On the other hand, I don't know if my kids even know what abortion is. (To be fair, I work with preschoolers and kindergarteners. Camp was for 1st – 6th graders, I'd bet my 6th graders know, but I digress...) Have we been so careful to protect them that we don't make known to them what is going on in the world? How will they change it if they don't know? These kids will be voting soon, maybe that strong impression that was made on them at this camp will help them do better research into the voting records of the candidates than the current generation. These kids really could get Roe v. Wade overturned if they set their minds to it. My church is non-political, and while I would never picket outside of an abortion clinic, shouldn't I be praying that God would bring an end to the legalized murder of innocent children?

Rachael is a kid so on fire for Christ that she tries to evangelize everyone around her. I think even her father was surprised when she walked up to a teenager at the local bowling alley and gave her a tract. Do I put a lot of stock in tracts? No. But, then again, I don't know many adults who would walk up to a stranger and tell them "God wants me to tell you that He loves you and He has a plan for your life", let alone a kid.

One of the first nights of camp, a kid got the mic and said that sometimes it was hard for him to believe in God or even that the Bible is true. I wished they would have shown on film the conversation that Becky had with this child later. They didn't, they also never gave us his name, but later he was seen, during free time, reading what looked to be a kid's version of Evidence that Demands a Verdict by Josh McDowell. A day or so later at a camp meeting session, he was seen raising his hand as one who wanted to be a soldier for God.

Becky uses a lot of object lessons. Which I think looks weird to people (I'll talk more about the people in the theater and their reactions). At one point she's giving a tour of her supply closet and showing different things she uses and where she finds them. Then at camp we see several used... washing their hands, breaking a mug with a hammer, etc. But I think the most controversial (in the theater and on the Fox News Network interview I saw with Becky and Mike Papantonio) was the cut-out of George W. Bush. As I write it, I realize it was more of a visual aid than an object lesson... anyway. They brought out a life size cut-out of "Dubya" and said, "The President came to visit us today, say hello to Mr. President" To which all the kids dutifully answered in unison, "Hello, Mr. President". I think the camp leaders were just trying to be funny, but it came off looking weird. Then, they had the kids pray "a blessing" on him and then they came up and laid hands on the cut-out and prayed for him to be wise and to appoint righteous judges. It was a very Biblical thing to do, but it came off weird, like I said. First in the beginning with the "Hello..." and then when the kids laid hands, at one point a little girl who was really having to reach to touch him, turned to look at someone off camera, but she didn't take her hands off him, so she kinda rolled up, which made it look like she was laying down, but she wasn't. I don't know if I explained it well, but, it's the best I could do.

Mike Papantonio was, I'm sure, there for balance. But, he was so liberal I didn't think he was balance. Fortunately he wasn't in the movie a ton, and when he was it was in small doses. He said several times that he was a Christian but that people with such "extremist" views as opposing abortion are idiots. He seems to paint all conservative, Bible-believing Christians with the same brush, the Religious Right, which is a judgmental group of hypocrites that shouldn't have any say in who holds office in America and shouldn't be allowed to teach their kids what they believe, because they're just indoctrinating them. I imagine that because the kids and camp leaders were Pentecostal and that probably looked so extreme to the filmmakers that they thought someone as liberal as Mike was necessary for balance.

They interviewed a Pastor in Colorado Springs. I'm sorry to say he came off looking like a jerk. He's a big name pastor with a big church. He unfortunately did what 95% of senior pastors in our nation do (I made up that statistic). In his interview he talked about how much he valued children and their contribution to the body. But when Levi went up to meet him after the service, he was exceedingly patronizing. Levi told him that he preached too and this pastor asked him if he (Levi) thought people liked hearing him preach. Levi answered yes, he thought so. Pastor then asked if Levi thought that was because his sermons were good or because he was a kid. Levi figured it was probably a little of both. Then Pastor told Levi to keep working the kid thing and by the time he was 30 he might have something significant to say. His tone of voice made me want to throw my drink at the screen.

Now, I promised something about the audience. There were about 35 people in the theater (yes, I counted). A few I pegged as children's pastors, a couple who looked like youth pastors, one family, and several people I couldn't figure why they came to see that movie. There were definitely people in the audience who weren't Christians. And possibly there were people in the theater who consider themselves Christians the way that Mike P considers himself a Christian. (Liberal and tolerant of everyone except conservative Christians). Either way, there were definitely people who found much of the content of the movie funny (they laughed) or "crazy" (I heard the word quietly uttered more than once.) It was interesting. Something I laughed at, because I know why she did it, but it did look stupid to some in the theater (you could hear both familiar "I've been there" laughs and hearty "how stupid are you?" laughs) the camp leaders were in the main meeting room before the first night and they were walking around praying for the people who would sit in the chairs, touching them as they walked by praying. Then, the funny part, they all ended up at the table in the back that held all the sound and PowerPoint equipment. And Becky laid hands on all of it calling for God to protect the integrity of the equipment, because "the enemy likes to get in and mess with these things... Lord we pray over the PowerPoint that it would work correctly..." Hilarious. And true.

I think, now having seen it, I would let some of my older kids see it. But, I would do it on DVD, because so much of what is seen would need to be talked about. You could get lots of lessons out of it. Between the little boy with doubts, to the abortion discussions, Mike P's liberal view of Christianity, to the snippets of home school lessons we observe regarding global warming, not to mention the Pentecostal movement and all it entails... really, there's lots of stuff.

Anyway, if you actually read this long review I hope it was worth it for you. Writing it has helped me resolve some of what I saw and figure out what I thought about it. So, I hope that it was/will be helpful to you.