A review of August Rush including a description of the movie, areas of concern, teachable themes, discussion questions, and scriptures to use. 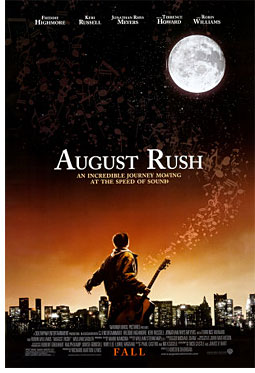 August Rush starts out following Evan Taylor, a "nice as apple pie" orphan boy living in upstate New York. The plot not only follows Evan, but keeps you tuned into the lives of each of his parents during his quest to reunite with them.

The beginning of the movie shows Evan standing in the middle of a field (the scene from the trailer). As is done throughout the movie, you hear the wind, then you hear melodies that Evan is hearing in the wind. This is interrupted by someone yelling, an older boy, looking for Evan. The older kids repeatedly call Evan "freak" and harass him for thinking that his parents would even try to find him. Evan knows little of his parents except that they were musicians, and he believes they are playing the music he hears as a sign to him. That causes Evan to have a special love of sound and music, and the movie does an excellent job of showing that through the orchestra of natural sounds Evan hears everywhere he goes. He believes that if he were able to take the music he hears and turn it into music that his parents would hear him as well.

The movie then shows Evan's parents meeting one another at a party. The movie does an absolutely fantastic job of not showing too much intimacy between his parents. They kiss for a moment and the movie fades to black. A few scenes later, Lyla (Keri Russell) and Louis (Jonathan Rhys Meyers) wake up (fully clothed) on a rooftop sofa. I wouldn't even have assumed anything happened if Lyla (Evan's mother) didn't end up pregnant.

Lyla was traveling with her father to play with the New York Philharmonic. She was a prodigy Cello player, with a bright future ahead of her. Louis (Evan's father) was the lead singer and guitarist in a successful rock band. He and his brother's band, The Connelly Brothers, were a huge hit in New York and were on their way up. After Lyla and Louis were separated, the both lost their passion for music. Lyla, eight or nine months pregnant, was arguing with her father about quitting the cello when she stormed outside and was hit by a car. When Lyla wakes up, her father tells her that they lost the baby.

Skip ahead 11 years and Evan has escaped the orphanage to find his parents. I won't give out the information of Evan's journey, but it is incredible to watch as Evan catches a hold on music and runs with it. The writers do an excellent job of pulling you into the "happy" reality of this movie. Most movies that have that overflowing sentiment are incredibly annoying, but August Rush pulls it off with flare.

The bottom line is I'd recommend this movie to almost anyone. Go check it out, take your spouse, you'll be pleased.

This movie has two considerations to look at before taking your child.

Aside from those two moments this movie is quite child-friendly, although not geared towards a child audience.