Karl Bastian, who is an alumnus of Moody Bible Institute as well as the former Pastor of Children at Moody Church, is the founder of Kidology, Inc. His parents met at M.B.I., a "Moody Bridal Couple" as students like to say. His family has a heritage of faith that is interwoven with the institutions founded by D. L. Moody.

As a veteran children’s pastor who received a Call to kids ministry at the age of ten, Karl's life mission is to equip and encourage those who minister to children. Through speaking, writing, and training, he seeks to challenge others to reach and teach kids for Jesus through a relational ministry approach. (Learn more about Karl)

One of Karl's lifetime goals has been to provide financial assistance to students who are interested in working with children. As a student at Moody, Karl was very appreciative of the financial assistance he received, which enabled him to complete his education. As a student a M.B.I., Karl worked multiple jobs, even street performing on the famous "Magnicient Mile" along Michigan Avenue on weekends to work on his school bill. Despite all his efforts, in the end it was financial aid and scholarships that enabled him to complete his Moody education and enter his first pastoral position debt free.

He is very excited about the opportunity he now has to be able to encourage and help others in return, just as he was helped. In addition to wanting to "give back," Karl has a strong desire to reach out to children with the Gospel of Christ and to train and equip others to do the same. He knows the power of the Word of God in the life of a child and the fruitfulness of a faithful servant, not only from his own relationship with the Lord, which began at age four, but also from the example of the work of God in the life of his mother, Patti Bastian.

The following is excerpted from a pamphlet entitled The Conversion of Patti Bastian: "Then, one year her world widened. Once a week she could actually depart the school building during the day and march in the care of patrol boys to a local site of religious instruction. Her particular released-time class was held at a Mennonite church that drew upon young, devoted Moody Bible Institute students to teach. Sometimes these marvelous bringers of illustrated stories would be marching along on the other side of the street toting their flannel graph boards, big picture stories, puppets and Bibles and things beyond imagination. It got to be as exciting as Christmas every week. … She heard about how the books were opened, the Book of Life, and of the judgment. She heard about the New Heaven and New Earth and descriptions of a place filled with things like jasper and crystal and every kind of jewel in a city made of pure gold. The place was so wonderful that the gates of the city were never shut. Oh, did she ever want to get her name in that book. … The director called her teacher, Jerry, over to the side for a chat that they thought velvet curtains would contain. But, Patti's ears were hearing a discussion of her immediate destiny. Jerry was being asked if he wanted a different assignment since he had only this solitary student, Patti. After a near eternity of silence, Jerry answered that he believed God wanted him to disciple this one little lady. And that was the beginning of a life-changing course of teaching that would bring Patti to understand the Cross and to love the Savior and His promises. Each Wednesday Patti would be filled with visions of the Kingdom before returning to doors that rusted and were carefully locked and to the unredeemable back yard… Week by week knowledge of God's Word and His grace was measured into an open heart. …On one of those magical Wednesdays, quietly and confidently, Patti responded to God's grace through His Son on the Cross. Through the faithfulness of a young man to a little girl lost and hidden away in a Chicago neighborhood, that one little girl now knew that another name, her very own, had been written in the Book of Life. 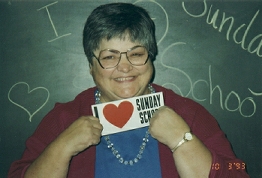 Patti (Leibforth) Bastian also was an alumnus of Moody Bible Institute. She graduated in 1964 with a Christian Education degree, married classmate Doug Bastian, and served the Lord as a pastor's wife. Patti enjoyed ministry to children, youth, and women throughout her life, and instilled her love of the Savior into her four children.

A note from Karl Bastian, My mom loved Moody Bible Institute. I was lucky to have her working on campus for a few years as the grad school receptionist and found my way by her desk for short visits between classes. I loved to prank call her desk with odd voices requesting catalogs only to end up giving her addresses of relatives around the country she would recognize. Whether she was teaching children in Sunday School, training volunteers in an informal workshop, directing the annual Christmas play, or just encouraging someone by taking time to sit down and talk with them, she was a life-changer. Her love of kids was contagious - I certainly caught her passion, and it lives on through my life and ministry and now touches thousands of children's workers daily and millions of kids monthly all over the world. As she invested in me, I want to invest in other young people who feel called to children's ministry and who want to make a difference in the world by making a difference in the lives of children. There is no greater way to change the world than to change the life of a child. And I don't believe there is a greater place on earth for training young people than Moody Bible Institute. So what better place for me to invest in young people - the same place my mom and others invested in me. I hope that this fund will encourage and enable many young people for years to become all that they can for the sake of kids!

Literally at the end of her life, Patti shared with Karl that she believed her vision for equipping those who ministered to children would be carried out through him. "Like David who longed to build the Temple, but was told by God that his son would build it instead, so God has told me that my son will fulfill my ministry dreams after I am gone." On the day we celebrate Jesus coming the earth, Christmas Day, Patti Eileen Bastian went to meet Him face to face, in 1996. This scholarship is part of her vision of helping to equip and encourage those who minister to children. To God's Glory, her vision lives on. 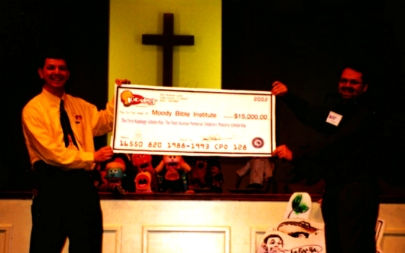 Applying for the Grant:

Current MBI students who wish to apply for the Patti Bastian Memorial Children's Ministry Scholarship Grant should contact financial aid at MBI, not Kidology. Grant applications are collected by MBI, then sent to Karl Bastian who chooses the recipient each year.

Giving to the Fund:

Currently, this grant provides between $500 and $1000 annually to a Moody Bible Institute student. If you would like to donate to this fund so that it can grant more, or more often (occassionaly we have to skip a year while the fund accumilates funds), you can do so here: Kidology.org/Donate. Indicate that it is for the MBI Grant.