What do you bring to the table when it comes to partnering with parents? Maybe it's time to renegotiate your terms. 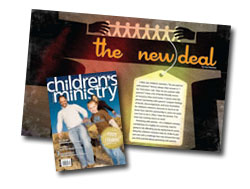 What do you bring to the table when it comes to partnering with parents? Maybe it's time to renegotiate your terms.

I often ask children's ministers, "Do you partner with parents?" Almost always their answer is, "I try." And when I ask, "How do you partner with parents?" I hear a list of family-friendly events or resources they send home. It seems even the phrase "partnering with parents" conjures feelings of doubt, discouragement, and even frustration for children's ministers, because as much as we know how vital this partnership is, we're not quite sure how to do it. Often I hear the lament, "I've tried, but nothing seems to work."

Negotiating Terms
Many children's ministries equip, assist, encourage, or "come alongside" parents. These are all good, valuable, kingdom-enhancing things. But when we say we want to partner with parents, we're talking about a whole new level of cooperation with a whole new level of understanding. We have to answer the question, "What does it really mean to partner?"

Let's start by thinking about it this way. In any effective partnership, there are at least two parties that have agreed to work together toward a common goal or purpose. Each has negotiated defined roles, responsibilities, and rewards. Once both parties are satisfied with what they've negotiated, they make a binding agreement, usually with consequences for breaking the partnership and penalties if a partner doesn't fulfill his or her negotiated responsibilities.

Now imagine a partnership with a twist. Imagine what would happen if each partner got to individually determine all the terms—roles, responsibilities, rewards, consequences—separately and without collaboration from the other partner. It wouldn't work, would it? Each party would have a different idea about its role, responsibilities, and rewards. The partners would be motivated by different factors, possibly even at odds. They would have different expectations of each other. And there's a good chance they'd mutually feel that the other side wasn't holding up its end of the bargain.

Working with the parents in your ministry, you must determine the following:

What would it look like if a ministry engaged in a real, negotiated partnership with parents? It's possible. I've seen it happen. I've seen attendance at our events specifically for parents and kids who've partnered with our ministry exceed even our popular general family events. Why? Because parents who buy in to the partnership see the value, agree to be there, and keep their end of the deal. Parents keep their commitments, not out of guilt, but because they feel called to a higher level of commitment, a commitment that's equally matched by a church that's also called to a higher level of commitment.

Giving Away a Children's Ministry
How do you introduce a negotiated partnership with parents to your church? I started at a congregational meeting. I stood at the podium to give my report on the children's ministry, and I told the congregation I wanted to play a word association game with them: I would say a phrase and they would name the first image that came to mind.

When I said, "children's ministry," the room lit up with smiles. As I pointed around the room, the adults called out things such as "Sunday school teachers" and "kids' church" and "VBS" and so on.

After a few moments, I said, "Thank you. It's very encouraging to have you share so many positive images you have of our children's ministry. But I'm curious...did anyone picture their home?"

"I want to share a Bible verse tonight to encourage you to continue to bring your kids to our awesome children's ministry," I continued. "But I have to be honest. I couldn't find one. What I did find, though, were a lot of passages about parents raising their kids to know God." Then I turned toward my pastor and said, "I haven't cleared this with the senior pastor yet, but I'd like to give up the children's ministry tonight."

There were a few gasps, so I quickly added, "No, I'm not resigning my job; I love my job. But I'm resigning the responsibility for raising your kids to know, love, and follow God. I'm going to start asking if there is any way I can volunteer in your children's ministry. That's right, effective immediately. I'm giving children's ministry back to you."

Getting a Partnership
A few weeks later I hosted a Parent Partnering forum. I wanted to open a conversation with parents on how our ministry—which is dynamic, energized, and a huge part of our church—could better partner with them in raising kids to know, love, and follow Jesus. I was nervous no one would show up. But they did. And so our partnership negotiations began.

I didn't offer any solutions, even as I thought I had some. That's part of the problem with our current efforts: We offer solutions before we listen. So I listened. I asked questions—even ones that made me uncomfortable.

The key is to listen and not explain or defend; simply listen and take notes. And say thank you—a lot. And then it's your turn at the table, your time to negotiate the role of children's ministry. I started by opening up to the parents, probably more than they were expecting. I told them about my great love for their children. I talked about how passionately I want to see their kids live for Jesus—long after they leave our ministry. I talked about the constraints on time and influence I feel when it comes to impacting kids' lives. I confessed that sometimes I'm afraid to approach parents about a problem or concern because I'm not sure how they might react. I admitted that I wish parents would let me in on their kids' struggles at home more. I reaffirmed my support and appreciation for them as parents; I know how hard they work and how much they invest in their children. And finally, I told them that more than anything, I wanted to help them in their role as their children's spiritual teachers—but I needed them to invite me in.

Sealing the Deal
I admit, I was nervous after pouring out my heart; but the parents responded very well. With that frank conversation, we'd set the stage for a totally open, honest, constructive conversation. I had heard them—their concerns, their struggles, and their hopes. And, likewise, they heard me. Negotiated is a big word, but it's just what we did. Each party talked about its respective side of the partnership, our desires and our hardships. We had to fully understand each other to have any hope of success.

I outlined what a partnership is—a defined relationship that's mutually agreed upon. I asked these parents to join an intentional partnership with our ministry to work together in their children's spirit- ual upbringing. Our goal was the same, I noted: to give their kids the best possible foundation of faith on which to build their lives. I explained what I would expect from them and what I would offer and deliver on my side. They could do the same. Our agreement would be open to discussion and revising, and when both parties were in agreement, we'd put it in writing and both commit to our side of the partnership.

Not long after the forum, after we'd come to a suitable agreement, more and more families started signing on to partner with our ministry with the goal of engaging in their kids' spiritual upbringing. So today if asked, "How do you partner with parents?" I can finally answer, "This is what I do...," and explain our partnership without hesitation.

You're already supporting, encouraging, and blessing parents and families; don't miss the opportunity to go a step further and build a genuine partnership with them. It's a win-win deal—especially for kids.

Karl Bastian (the "Kidologist") is creator of toyboxtales.com and founder of Kidology.org. He's served in children's ministry since he was 10.

Insider Insight
To effectively build a partnership with parents, you need to know their perspective. Here's a snapshot: