Zones › Movie Review: Pirates of the Caribbean: At World's End

Movie Review: Pirates of the Caribbean: At World's End

Thoughts on Pirates of the Caribbean: At World's End, a film NOT recommended for use in children's ministry. 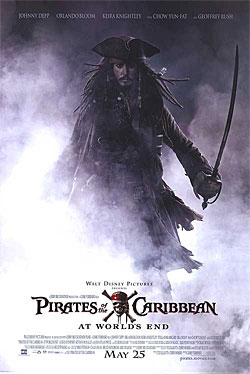 The first Pirates of the Caribbean movie, Curse of the Black Pearl, was a thrill ride in visual effects, well thought out story line, and a happy ending.

The second Pirates movie, Dead Man's Chest, was filled with many (perhaps too many) over-the-top exciting action sequences. While the plot consisted of a long list of incomplete story lines, you knew you were being set up for an exciting finish that would hopefully tie up the loose ends and conclude the story with a grand finale battle.

As it turns out, the final (or is it?) movie in this trilogy, At World's End, lost its way and should have been titled At Creativity's End. My mother always reminded me, "If you don't have anything nice to say, don't say anything at all," so it is tempting to end the review right here.

Is it appropriate for children? I think not, very much so.

Some spoilers ahead, so read with caution...

The opening scene shows many pirates being hung after all their rights as citizens have been stripped, including a young boy being hung mercilessly even as he begins to sing and others join him. The action sequences are all highly violent and busy battles. While these scenes were filled with some exciting moments, they get blurred by the sheer sum of them. Nowhere are the closely choreographed battles that were a highlight of the previous two.

There are some humorous lines in the film, but they hardly redeem this pointless money-grab. Some sexual humor is to be expected today -- even in children's films -- however, the fascination with Elizabeth Swan gets embarrassingly crude, to point that you wonder if immature teenagers were allowed to write parts of the script instead of grown men. While early in the film I was disappointed, I assumed it could only get better. But it never did.

One must be willing to put up with heathen gods, magic spells, drinking and undead people walking around (or floating by) in order to even partake of this pirate-era film, but it seems the writers' and directors' idea of a finale was to kill more people than the previous two movies combined and have just about everyone turn on everyone else showing that the highest ideal is to always put oneself first.

The final wisdom of the film is the repeat of the line said in all three movies, "Take what you can, give nothing back," which is exactly what the directors did to audiences with this film.

There is much to complain about in acting, scripting, and the plot, but I will heed my dear mother and not list the lameness and silliness of the film, but to say that the ending is the final disappointment.

The trilogy begins with an unlikely to be fulfilled love between a pirate-born blacksmith and a governor's daughter. Throughout the series, the young boy -- Will -- is in pursuit of his love, Elizabeth, risking his life over and over to save her. The ending is sad and pathetic. We've rooted for the two of them throughout the three films, and any hope that a fourth film may free Will from his fate in order to be with his wife is shattered by the "bonus clip" at the end of the credits.

Redeeming? The only thoughtful line in the film was by the surprise appearance of the father of Captain Jack Sparrow, played by Keith Richards, who says, "The trick isn't trying to live forever, it's being able to live with yourself forever."

Since there is little to no use for this film in ministry, normally I wouldn't bother to review it, but since nearly everyone who reads this review probably saw it anyway (as did I), I think it fitting to have a discussion here on Kidology in regards to what you thought of the film. I'm not able to see much positive in it, other than a few passing laughs, but what did you think?