Zones › Movie Review: Harry Potter and the Order of the Phoenix

Movie Review: Harry Potter and the Order of the Phoenix

A review of Harry Potter and the Order of the Phoenix including a description of the movie, areas of concern, teachable themes, discussion questions, and scriptures to use. 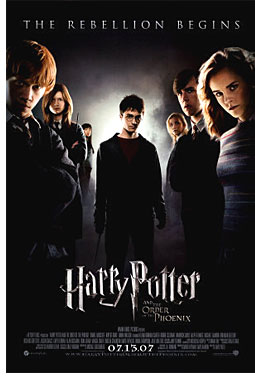 In this fifth installment of the Harry Potter movies, Harry Potter and the Order of the Phoenix, we are introduced to a 15-year old Harry (Daniel Radcliffe) sitting in the park confronted by Dudley (Harry Melling), his cousin, and Dudley's bully gang. All of a sudden the sky goes dark and Harry and Dudley are running through some tunnels to get home. Everything goes cold as both Harry and Dudley are attacked by Dementors, evil creatures who can suck a person's soul from their body. Luckily Harry has battled with these creatures before and knows how to ward them off.

Upon returning home, Harry receives a letter from the Ministry of Magic stating that he has been expelled from Hogwarts School of Witchcraft and Wizardry for underage use of magic outside of school in front of Muggles (non-magic people). That evening Harry is whisked away from home to his godfather's home where Harry finds out that Professor Dumbledore (Michael Gambon) has reconvened a group of people who were formed 14 years prior to battle Lord Voldemort (Ralph Fiennes) and his followers called Death Eaters. Dumbledore's group is called "The Order of the Phoenix". Harry also finds out that in spite of the death of an Hogwarts student the previous year at the hands of Lord Voldemort, the Ministry of Magic is denying that the Dark Lord has returned from his assumed death and has been at work using a publicity campaign to discount Harry and Dumbledore's claims that He-Who-Must-Not-Be-Named has returned.

After being exonerated of charges of misuse of magic, Harry returns to Hogwarts along with friends Ron (Rupert Grint) and Hermoine (Emma Watson). At school, they find that there is yet another Defense Against the Dark Arts professor -- Delores Umbridge (Imelda Staunton). Umbridge, undersecretary to the Minister of Magic, is more concerned about students passing their standardized tests than about preparing them for the impending danger of Lord Voldemort's return. She denies any claim that Voldemort has returned and proceeds on a systematic takeover of Hogwarts by becoming "High Inquisitor" of the school and enacting numerous rules which harshly limit the freedoms of the students.

Some of the students, led by Harry, proceed to meet secretly and learn defensive magic to protect themselves when the Dark Lord decides to begin his war and take over the world. The students call themselves Dumbledore's Army as a sarcastic response to the Minister of Magic believing that Dumbledore is starting rumors about Voldemort returning in order to take over the position of Minister of Magic. Eventually, the students are discovered by Umbridge, and Dumbledore is accused of amassing an army. Dumbledore leaves before he can be arrested and Umbridge becomes headmaster of Hogwarts.

All while this is happening, Harry has been having visions of a room in the ministry of magic. After he has a vision of Arthur Weasley (Mark Williams), Ron's father, being attacked by a snake and it is found out to be true, Dumbledore suspects that there is a link between Voldemort and Harry in which Voldemort might be able to control Harry. After failed lessons with Professor Snape (Alan Rickman) to safeguard Harry against an attack on Harry's mind, Harry has a vision that his godfather is being tortured by Voldemort at the Ministry of Magic.

Harry and his friends arrive at the Ministry to find that Harry had been tricked so that Voldemort could get his hands on a prophesy that involved Harry and himself. After a battle between the Death Eaters and the Order of the Phoenix, where Harry's godfather Sirius Black (Gary Oldman) dies and the prophesy is destroyed, Harry is confronted by Voldemort. Dumbledore shows up, and there is a battle between these two powerful wizards. At one point, Voldemort uses his connection with Harry to try and kill Harry. Harry fights back and defeats Voldemort by showing sympathy for Voldemort because Voldemort has no one who loves him.

As Voldemort leaves the Ministry of Magic, members of the Ministry, including Minister of Magic, Cornelius Fudge (Robert Hardy), see that Voldemort really is alive and back. The movie ends with Dumbledore being restored as headmaster and Fudge resigning as Minister of Magic. Harry and his friends return home realizing that there is a war ahead of them.

As always with the Harry Potter series, there is a debate on whether the magic used in these stories is simply part of the genre of fantasy literature or if the magic in these stories constitutes actual witchcraft that is spoken against in the Bible. I think that this controversy has been discussed enough since the first book came out 10 years ago. For more discussion on this you can view previous threads on Kidology or elsewhere. Another good source to be better informed on this controversy is the book What's a Christian to Do With Harry Potter by Connie Neal.

This movie definitely reflects an older Harry and a much darker world because of the return of Voldemort. Battle scenes are a bit more intense and the movie is darker than the others. Younger children may find the movie more frightening than the previous ones.

Much of the movie surrounds the tension between Professor Umbridge's rules and regulations and the students concerns that they are being lied to and put in danger's way by not being prepared for the seemingly inevitable war that Voldemort is going to start. A large group of students meets secretly, in blatant opposition to the rules, in order to learn defensive magic. Children may be confused at what constitutes legitimate and illegitimate forms of civil disobedience.

I know these scriptures don't explicitly talk about civil disobedience, but they are but a few examples of Jesus committing acts of civil disobedience that might be beneficial in bringing up this topic with children.