A review of Beverly Hills Chihuahua, including description of the movie, areas of concern, teachable themes, discussion questions, and scriptures to use. 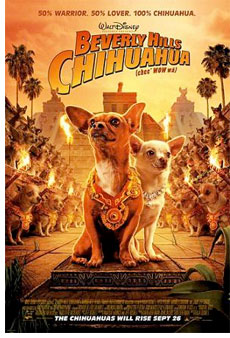 Chloe (voiced by Drew Barrymore) is the typical rich girl having lived her life going to day spas, shopping for the hottest fashions, eating at gourmet restaurants and sunning by the pool at her luxurious home. The only catch is that Chloe is a Chihuahua.

Chloe and her friends seemingly lack for nothing and spend their time doing what they please. That is until Viv (Jamie Lee Curtis), cosmetics guru and Chloe's owner, has to leave town. Because she doesn't want to leave Chloe in the care of strangers, Viv has her niece, Rachel (Piper Perabo), take care of her beloved dog. Because she, too, is a pampered rich girl, Rachel isn't too happy with the idea of taking care of a dog while she has a lot of shopping and hanging out with friends to do.

On a whim, Rachel and her friends decide to go down to Mexico for a few day, and Rachel brings Chloe along. While in Mexico, Chloe decides to find a party of her own instead of staying in a hotel room eating canned dog food. Chloe quickly gets lost and ends up being dognapped and driven to Mexico City to be a part of an illegal dog fighting ring.

While at the warehouse where the dog fights happen, Chloe finds herself out of her element, alone and scared. When Chloe is taken to the dog fighting area to be used as entertainment against a Doberman named Diablo (voiced by Edward James Olmos), another dog, a German Shepherd named Delgado (Andy Garcia), saves Chloe and escapes from the dog fighting ring. Delgado promises to get Chloe back to Beverly Hills and thus begins an adventure that brings them up from Mexico City to Puerta Vallarta and up north through many a small Mexican town. Along the way, Chloe learns that there is more to life than day spas and gourmet food. She also learns that there are people all around her who care for her, if she took the time to notice and be grateful.

This was a cute movie that my kids enjoyed. There were a number of funny moments with Papi (voiced by George Lopez) who is Viv's gardener's dog. Papi plays the typical caricature of the macho Latino lover confessing his love for Chloe and exhibiting swaggering machismo as he searches for Chloe.

There were some suggestive lines from Papi that went over the heads of most of the kids in the theater.

Also there are a couple of scenes that could be intense for really young kids. When Chloe is placed in the dog fighting ring, it is made clear that she is meant to die. When Diablo, the Doberman, comes out to kill Chloe he snarls a lot and threatens Chloe.

The other possible intense scene is when Delgado is explaining how he lost his sense of smell and was retired from police work as a K-9. Delgado and his partner are looking for Diablo and his owner in a dark warehouse when Diablo attacks.

Some people might find the stereotyping of Mexican culture and people for the sake of humor offensive as well.


Luke 14:7-14 - Chloe has know nothing other than a living a privileged life. She can't imagine being friends with Papi because he is "below her." She is quickly humbled when she is dognapped and then subsequently escapes. She learns that friendship, character and humility are more important than all the privilege and riches she grew up with.


Numbers 30:2; Matthew 5:37 - Delgado made a promise to get Chloe back to her owner. Even though he preferred to travel by himself, Delgado kept his promise to Chloe, even if it meant putting his life in danger.