A review of Charlotte's Web including a description of the movie, areas of concern, teachable themes, and discussion questions. 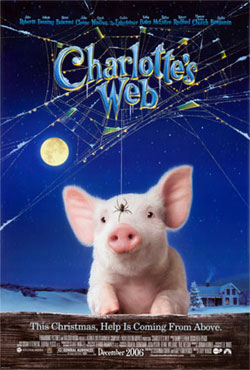 Charlotte's Web is an OK movie with several teachable moments. As a movie based on a book, it is mostly accurate with only minor differences (e.g. Templeton's nest is not directly under Wilbur's feeding trough). The main themes throughout the movie are kindness, miracles, and friendship which is similar to the book although the movie focuses more on the miracles and less on the friendship than the book does. Overall, it is not a bad adaptation, but it is not quite as good as its popular cartoon predecessor.

My biggest concern in this movie stems from the fact that I am somewhat arachnophobic. Charlotte is a little too realistic and ugly without any touch of cuteness. I eventually got used to that but the scene with her babies made me shudder. My wife thought that was a little creepy too, but didn't consider it to be quite as nightmarish as I did. This realness might frighten kids.

A second concern was the portrayal of Fern, the main human character. Specifically in relation to her parents she is portrayed as somewhat belligerent and disobedient. In the face of her disobedience, her parents are portrayed as having a hopeless, "what can we do?" attitude.

At one point, Charlotte explains the process of catching and eating small insects and comments, "... then I say grace 'cause that's always nice'." This was the only reference, other than calling a minister over to see the web, to anything divine and it is a rather flippant attitude about it. Although the movie talks a lot about "miracles," they are never ascribed to any higher power. At one point a psychiatrist talks about how a spider web itself may be considered a miracle, but there is a noticeable lack of divinity behind the miracles.

There are several teachable moments in this movie. Here are a few that I noticed:

There is a lot that can be said about this movie in terms of friendship, sacrifice, and many other values. I am always a bigger fan of books than of movies but, in any case, the fact that this movie is being released right now provides a great opportunity to use it to turn children toward Christ.