A review of The Nativity Story including a description of the movie, areas of concern, teachable themes, discussion questions, and scriptures to use. 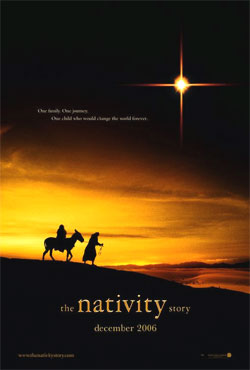 The Nativity Story covers the events of the nativity, drawing from the Gospel accounts of Matthew and Luke along with traditional aspects. The movie opens with a historical recap of scrolling text and you find yourself in Bethlehem as the soldiers of Herod search homes for infant boys to kill. We then have the caption, "1 Year Earlier" and the story begins. The action unfolds as we see recorded in the Matthew and Luke accounts with reflections of how life was for people during this time and historical injections of the culture. The dialogue stays true to Scripture and the circumstances are treated much as one would respond in real life. While telling a serious story, humor and authenticity are present. The reality of the times they lived in was prominent and a great item to use in teaching (more below on this).

Two items concerned me before seeing this movie: accuracy and format. On a scale of 1 to 10, I would give it a 7 for accuracy. While all the main items are addressed and seen in the movie, a few items were different or missing, such as:


Regarding format, I was curious to see how well will it would be done and to what audience would be appropriate. While the rating is PG for some violence, the picture itself is rather mild. I would say the violence displayed on the screen is no more violent than what we see on the evening news. There are no graphical or gory scenes, in fact the items that would be the most violent are cut away just before anything happens (i.e. when the soldiers are sent to kill the infants and they have their swords drawn, they cut to another scene before you see anything happen, although you do get the idea).

The duration of the movie is only 90 minutes but this may be a bit long for the younger children that would not have the attention span to follow along with everything. A better setting may be in a home or classroom where bits and pieces of it can be seen and then discussed. I would recommend that upper-elementary (age 8 or 9) and above see the movie. Those younger would be at the parent’s choice if their child’s attention would be maintained throughout the movie.

A great teaching theme was mentioned near the end of the movie. It was stated that, “every one of us has a gift”. This could be developed for spiritual gifts that God gives to each, or a gift or ability to share with others, or just being a gift to those around us in general. That God is the one that equips us and we have to be a willing vessel to do His will.

Other ideas would be to separate the story into in various elements and present a portion of the movie as you discuss each area (Zacharias & Elizabeth, Mary, Joseph, Shepherds & Magi, Herod, etc.). This could be incorporated into materials already on hand such as previous Christmas lesson series like The Polar Express or develop a new series with this as the key element.

You could also use this movie as a resource for the culture and customs of the times. There were many things seen through the movie that could be used to discuss how they used to live back then, outside the Christmas season. I do not know how they will break apart the scenes when the DVD is released, but I would consider coming up with two or three ways to present what is in the movie for each of the scenes. Of course you can also search the internet and find other resources to use along with this.

You could add any Christmas discussion question you already have or find on various websites. I would add some questions for the kids on how people lived back then, how would you feel if you were Mary or Joseph and these things were happening to you? How would you respond to the treatment of others that did not believe you. How do you handle it today when you tell the truth or do what is right and still are looked upon as being wrong?

Given that this movie is based on the Gospels of Matthew and Luke, you could use passages from these books when discussing this with your children.