Movie Review: Rise of the Guardians

A review of Rise of the Guardians, including description of the movie, areas of concern, teachable themes, discussion questions, and scriptures to use. 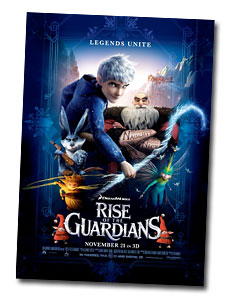 Guess the movie! An evil force has threatened the earth. A band of superstar heroes bands together to over come it. Evil is defeated. Your guess? The Avengers? Not this time! The evil force is Pitch (aka the Boogeyman who reminds you a lot of Satan). The heroes are North (aka Santa), Sand (the Sandman), Bunnymund (the Easter Bunny), Jack Frost, and Tooth (the Tooth Fairy). The movie: Rise of the Guardians.

Here's the crisis all summed up by North, "There's a real danger coming. The dark dream-spoiler Pitch has suddenly reared his black head again... If he can keep the Guardians from their duties, the children will stop believing. And when kids blast past belief, all manner of bad things can happen." As children sleep Pitch turns their dreams into nightmares and makes them believe in evil.

And which of these great guardians is the only one who can save the children of the world? You would think the big guy, North, right? No! Jack Frost who was not even a guardian until the Man in the Moon directed the other guardians to enlist him. Don't worry! The kids are safe, but my feeling is they might be better off if they didn't see this one.

I don't know how you feel about all of these characters, but they are not what they are supposed to be. North/Santa is a buff Russian guy with a tattoo of "Naughty" on one arm and "Nice" on the other. He carries two swords on his back which he uses throughout the movie. He gets cranky quite often. The elves are inept little creatures and the toys are made by abominable snow men. He tells us that the powers of the guardians are "greater than you can ever imagine." He says their job is to, "Protect the children of the world… for as long as they believe in us, we will guard them with our lives."

There is a real spiritual vibe to this movie. These characters are not just fun, but supernatural/magical and they are being led by the Man in the Moon. Their assignments go far beyond delivering toys, coloring eggs or leaving money for teeth. While these characters band together in the Santa Clause franchise, this is not for fun.

There is a lot of fighting in this movie. Sand is whipped. Swords are drawn. Boomerangs are thrown. There is a lot of other "magical" kind of violence. No more than from what you would expect from a movie like this.

As for language you hear a "gosh!" The bunny also says "bloody" and "crikey" and uses the phrase "rack-off" which would not offend those in the US as it would our Australian friends.

I write this review with this disclaimer. This is a well-advertised film and I am sure that many of our children will see it. I would definitely not take children to this movie. I personally believe that because of the content, it should not be used in Children's Ministry. I would really be concerned about using it as part of a lesson, mainly because that looks like "the church" is endorsing a film that is really not good for children. I revert to the rule that what I may excuse, others may abuse in excess. A child may see this movie at church and because of that watch it at home, and seeing that their church leaders use it as an example, may think that this movie is okay to watch in its entirety.

My 9-yr-old niece went to see this movie, so I asked her what she thought. Her response was, "It was weird and almost okay but I never want to see it again." That sums it up for me, too.

Bob Hoose in his Pluggedin.com review summed it up well, "Christian parents who end up watching this movie with their kids may feel a renewed sense of urgency to be intentional about teaching them the true meaning of Christmas and Easter. Indeed, as we see here, belief does matter. Just not for the same reasons that worry the Guardians. So Rise of the Guardians can turn into an "excuse" for us to renew our passion for finding creative ways to help our kids embrace truth even as Hollywood storytellers are selling them fantasy."

In my opinion, this is definitely not the Christmas movie to see.