A review of Hop, including description of the movie, areas of concern, teachable themes, discussion questions, and scriptures to use. 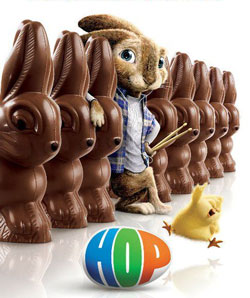 E.B. is the heir apparent to the Easter Bunny. A teenage drum-playing free spirit, E.B. is more interested in realizing his dreams in Hollywood, than in following in the footsteps of his father, and generations of forefathers. It is not that he didn’t grow up loving everything about Easter. He simply balks at the prospect of having to fulfill the candy laden wishes of children the world over, and his father’s expectations for perfection. His father expresses disappointment in his drum playing dreams, and demands that E.B. conform to his Easter Bunny destiny. E.B. rebels, running away from home on Easter Island to Hollywood, California, not wishing to be crowned as the new Easter Bunny.

Fred is E.B.’s human counterpart. He is a twenty-something year old disappointment to his father. He knows he is a disappointment because his father reminds him of it repeatedly throughout the film. No job. Living at home until he is finally confronted by his father, mother, and two sisters in an awkward intervention. No direction in life. Ultimately, he leaves home, but not before his eldest sister asks him to substitute for her in house sitting for a very wealthy person who lives in Beverly Hills.

And that is when the plot thickens.

E.B. and Fred’s stories provide a carefully constructed parallelism centered on their strained relationships with their fathers. Although much of the relational nuances might be lost on younger children, they do strike a chord with adults, teens, and with help, older children in the audience.

E.B complains to his father than “everyone makes mistakes.” Paraphrased, his dad indicates that mistakes can and should be corrected and removed. Later, he demands perfection as the ultimate expectation. This frustrates E.B.

Fred’s dad admits to once telling him that he will grow up to do great things. Later, he lowers his hopes, wishing he would simply move out and get a job. Any job. He exudes a visible disgust toward his son in full view of his family, which does not seem generally supportive either, with the exception of his sister. His father’s attitude is not unrealistic, given that Fred appears to be approaching 30 years old with a profound lack of sobriety about his future, but still one wonders how much his dad’s relational skills have contributed to his failure to mature.

Ultimately, it all works out for E.B., Fred, and their relationships with their fathers, but I will refrain from spoiling that part of the story here. Rather, it is worth noting that it took both sons recognizing their own selfishness to produce a new purpose in life for each, and also healed relationships with their fathers. To wit, they foiled the coup d’état of the Easter Bunny’s second-in-command. It is altogether neat and tidy with a feel good nod toward another successful Easter Basket delivery season.

Hop is rated PG for what the ratings committee cites as “some mild rude humor.” This is an understatement. The marketing and the look of the film cater to a very young audience, that is, a G rated audience.

However, there are two scenes in which bunnies visit Hugh Hefner’s playboy mansion since that is where bunnies go in Southern California when they need shelter, right? First, E.B. goes there looking for help. He explains to Hefner through the security device that he is a bunny and that he understands bunnies are provided shelter at the mansion. Hefner clarifies that he only allows sexy bunnies, to which E.B. replies that he can be sexy.

Later, the Pink Berets (the special forces for the Easter Bunny) arrive there in search of E.B. They meet also meet with resistance from Hefner who expresses anger at being bothered again.

The humor produced awkward laughs among adults in the audience. There were more children than adults in the packed theater. I wonder how parents will answer the obvious questions at home. Mommy, who is Hugh Hefner? Daddy, what is playboy? What is sexy?

In another scene, Fred’s sister meets E.B. who imitates a robotic stuffed animal. She is smitten, and so is he, so much so, that he hugs her, stroking her hair sensually and sniffing it.

There is also an attempt to earn cheap laughs when E.B. poops flavored jelly beans. To judge from the unwitting taste test from Fred’s sister, the watermelon is particularly good. You can be sure that kids who see this will want to mention or act out the scene in some way at home.

Parental guidance is obviously suggested in choosing whether to view the film. Personally, I would opt out of allowing children to see this movie.

Both E.B. and Fred were selfish. They wanted to remain in that adolescent phase where they could avoid the serious responsibilities of self-reliance and considering the needs of others before their own. It took a crisis in both of their lives to help this realize this and do something about it.

When E.B. and Fred finally embraced their responsibility to save the Easter Bunny and Easter, things began to fall in place for them. They took personal responsibility and earned respect from their fathers, securing hope for growth in maturity.

Both E.B.’s father and Fred’s father apologized to their sons for the way they had treated them. They admitted they were wrong and asked for forgiveness. These scenes were the most redemptive of the film, and added a dimension of strength to both characters which previously had been missing.

Hop would have been a much better movie, were it not for the filmmaker’s desire to supply an edgy tone via the references to playboy and the other rude behavior. Although I do not recommend the film for children and families (or anyone, for that matter; not just because of the playboy references, but because the film falls far short of its writers’ predecessor, Despicable Me), I acknowledge there can be redeeming value to be gleaned for those who choose to view it anyway.